What is marketing and Public Relations? 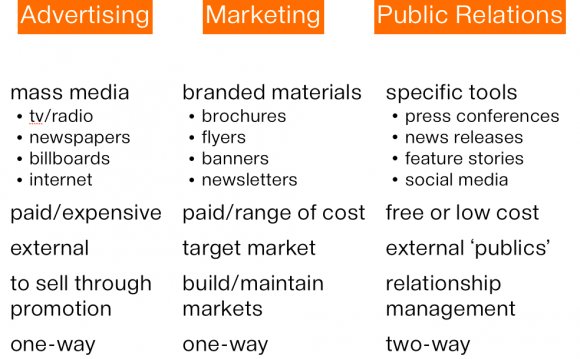 Both marketing and public relations went through such dramatic growth and evolution during the first half of the twentieth century that at least one business historian has referred to this period as their "teen-age years." They both experienced surprising growth spurts and, as they gained increasing influence in the business world, they experimented with new strategies and frequently flexed their muscles as they adjusted to what they were becoming and tried to project a positive and confident self-image.

As marketing and public relations expanded their spheres of activities and as they became more aggressive in communicating with more and more and ever-larger publics, they often ended up talking to the same publics, and they sometimes used the same techniques to do it. But, even when their actions appeared to be similar to outsiders such as the consuming public, the practitioners themselves knew that their two disciplines were conceptually very different. Many took pride in these distinctions and were quick to explain them to anyone who asked. Ray Simon, for instance, expressed them very concisely in his second edition of Public Relations: Concepts and Practices when he wrote:

"Marketing and public relations ... both are major external functions of the firm and both share a common ground in regard to product publicity and consumer relations. At the same time, however, they operate on different levels and from different perspectives and perceptions.

The traditional view ... is that marketing exists to sense, serve, and satisfy customer needs at a profit.

Public relations exists to produce goodwill in the company's various publics so that the publics do not interfere in the firm's profit-making ability."

That doesn't mean there was harmony or total cooperation between the two professions. There's always been some degree of tension and competition between public relations and marketing people, especially when it came to questions of which discipline ought to be dominant or which contributed more to their parent organization's well-being. They also competed for sometimes scarce internal resources and for public attention.

If an organization was not-for-profit -e.g., if it was a government agency, community service organization, non-profit health care facility, etc.- and it saw its primary goal as serving the public ...

If an organization was a business and profit was its over-arching goal ...